Every few days this summer, I've thought to myself: Wow - I need to sit down and write about this so I don't forget the details that aren't in the photos. Good intentions, which have not seen the light of day. I will get around to some more detailed posts about our Seattle explorations, but they'll have to wait. There's exactly one week left until the Faery starts her new school, which means the two months since we moved to Seattle truly have flown by.

On Saturday, J spent the afternoon with some friends of his that he's made through work. They went on a massive 50km bike ride through Seattle, on some kind of brewery sampling mission. Meanwhile, I had another entire afternoon of entertaining the kids and monotonously mind-numbing housework. The deal was that as soon as he got home that night, I could take myself off to go see a movie - which I did. Unfortunately, I was in a bit of 'mood' by the time evening had arrived (discovering four sneaky patches of cat piss on carpet in a not-often used room will do that)... and instead of cheering up, I felt even worst after the movie.

Once I returned home, I realised the problem was that I was feeling 'lost'. Acutely aware that I only have a couple of friends here (known from years ago), and good old-fashioned down in the dumps. Christ, we've barely been here two months - during a part of the year where there's no routine, structure, and little in the way of opportunities to meet people. I need to go easier on myself, I know. These things take time, and I've already signed up for various new ventures here which will help (more on that another time), so it's not like I'm sitting around moaning without actually making an effort - I just need to make patience a new virtue, mantra, or whatever it is... and get back into some bloody yoga!

So there we have it. I had a bit of a pity party on Saturday, which carried though into Sunday.

Then, Sunday afternoon saw us attend a neighbourhood picnic party at our local park. It was an annual event put on by the American equivalent of a local council - sort of like a block party. Have I mentioned how there's a really lovely sense of community in out new area? We just needed to bring a side dish or dessert to share, and the rest was taken care of. We signed up on arrival, were given name tags to wear, and promptly feasted on barbecued burgers and hotdogs, curries,  and frozen yoghurt (provided by the local restaurants and shops)... a Ben & Jerry's ice cream truck even turned up to hand out ice cream.

There was a balloon dude for the kids, face-painting, water balloon tossing contest, bubbles and chalk - leaving J and I free to chat and meet other folks and parents in our neighbourhood. It was fantastic. When the rain arrived and it was time to leave, we left knowing a bunch of new faces and names, kids who were similar ages to ours, and parents from the same school that the Faery will attend - along with praise sung about the school. We met people who'd lived in the Seattle area all their lives, and people who were transplants like us, with Australian and British ties. I'd been invited along to trivia nights and girly drinks.

All in all, it was reassuring. My 'mood' had shifted, and I was glad we'd taken the time to attend.

I came home feeling hopeful for my own happiness here. 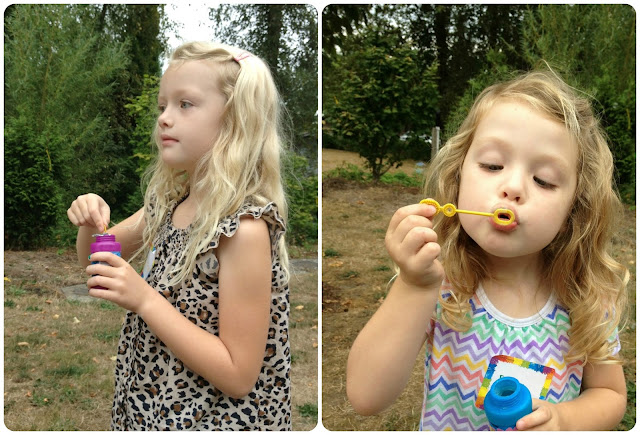 (On a side note, after giving it much thought recently, I'm doing away with watermarking my photos. Lately, I've been shifting away from photo-editing/processing in general. With the exception of Instagram - and even then I don't add filters as much as I used to - the most I can be bothered with is a little straightening and cropping when required. I'm deriving more pleasure in keeping an image as true to the one that landed on my phone or camera, and aiming for better shots to begin with. The water-marking issue mostly comes down to a time factor and laziness, but I've also realised that if someone really wanted to steal an image of mine, they'd simply crop out the watermark anyway. I don't condone it, but I can't stop it.)

Posted by Madeleine at 5:28 PM

Collect pretty buttons? Here's one for you: